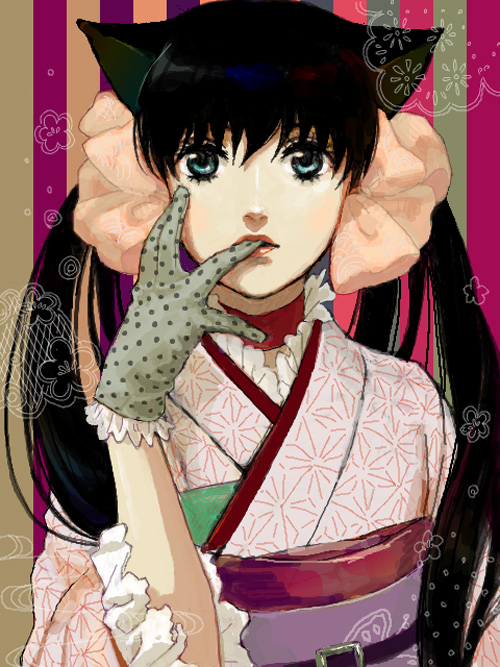 Shance: Greetings! Again, it is I, Shance of Rainbowsphere. Some of you may have read about me when I penned a post about the Hime Cut hairstyle with Yi last year. Now I’m back for more. And this time, Yi decided that we should talk about a very popular trope in Japanese visual media: Cat ears, more commonly known as nekomimi.

Yi: Yes. Of all the wide ranging—often super weird and unexpected—anthropomorphisms anime have to offer, cats seem to gain especial favor among fans. Indeed, nekomimi has become anime’s own unspoken mascot for as long as I can remember.

Shance: Nobody really knows when the nekomimi fad started, but some suggest that it started in the same era Western animation and culture started their own versions of animal anthropomorphisms, which date back to the 1940’s. While Western animation focused on creating costumed anti-heroes with a feline theme, the Japanese focused on elaborating on the cat in order to match a character’s behavior and characteristics.

Yi: That feline characteristics grew to be the dominant presence in anime, as opposed to other animals, is perhaps not as arbitrary as it appears. Among our furry friends, the two that we are most familiar with today are dogs and cats. As the most popular and common house pets, we tend to feel more compassion and relation to puppies and kittens than, say, bears or raccoons, and definitely reptiles or fish.

We can further differentiate our preference for cats to dogs in anthropomorphism through an aesthetics approach. The difference lies in how we caricaturize these animals, and how easily their defining characteristics lend to zoomorphism. Although the ears and tails of both species are features that can simply be added to a cute girl, animal faces are much harder to adapt to that of humans.

To illustrate this, let us do a little thought experiment. First, imagine a human face. Then adjust the features—nose, eyes, mouth, cheeks, or facial hair—to invoke an unequivocally feline look. Be sure, however, to still keep it distinctively human. I imagine most people have something that is reminiscent of “(o ω o)”. Moreover, I would guess the images we have lie closer to that of humans on the sliding scale of furriness.

We can try the same process with canines. For the sake of emphasizing a point (and also because I love my Cookie), let us  imagine a golden retriever and her long doggy snout. Now, constructing a zoomorphic face that incorporates defining canine facial features while retaining human enough forms, although possible, requires a slightly greater leap. Furthermore, the results are probably unsatisfactory on the first try. 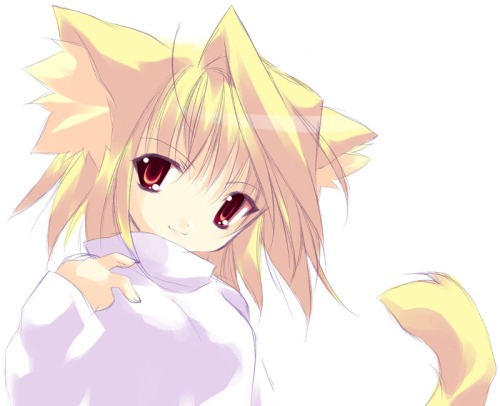 Shance: That’s a very straightforward approach, Yi. And while comparison of physical traits between pets and humans give us a general idea of how cat ears became popular, another focal point to note is the behavioral characteristics of the animal in question.

Cats have been known to be very curious animals. Because of this innate curiosity, subsequent characteristics of the cat come into the fray, such as childish playfulness, agility, and mischievousness. Add in the already mentioned cute look, and you have a very genki character that sprouts cat ears whenever these cat-like characteristics surface. Furthermore, the general appeal of nekomimi comes from the fact that, with cats being cute, the characters that sport the characteristics of a cat are also seen as being cute. This helps a character exhibit an aura of cuteness, which then initiates a paternal protective reaction known to the otaku as moe.

If we are to take an example, a good one would be Arcueid Brunestud of Tsukihime fame. She has this bubbly, energetic personality that you usually see on characters that see everything from a child’s perspective. She’s always in awe with things that we perceive as simple and normal. She wants to try things that are totally new to her, and be excited before, during, and after experiencing them. And she’s a True Ancestor (Shinso, or what they simply call in Japan as “True Vampires”), which means she also has cat-like reflexes, aside from her cat-like speed and her weapon of choice: sharp claws from the nails of her fingers. Due to these characteristics, it was only a matter of time before the minds behind TYPE-MOON started drawing and writing scenarios with her being portrayed with cat ears. What do you think, Yi?

Yi: Precisely, Shance! Arcueid is a very telling example of how we attribute human characteristics—curious, playful, teasing—to animals, and in turn associate our imposed stereotypical behaviors of animals to our characters. In that sense, anthropomorphism and subsequent zoomorphism are a layered, well-constructed fiction. It is within this fantasy, in nekomimi, in kemonomimi, that we find escape and meaning beyond the boundaries of human conditions.

Shance: It’s a symbiosis that not only strengthens a character’s charisma, but also his or her importance to any plot or story. Of course, that only means that I have my own plethora of favorite nekomimi-clad characters, one of them being Arcueid.

Yi: As for me, I think my favorite example has to be Kuroneko. She is, after all, a carefully-constructed girl superimposed with all our favorite “feline” personalities (either by herself or by the anime).

Shance: I guess that’s an obvious choice. If we go by the criteria you presented, another favorite of mine would be Hakase from Nichijou. With just a pair of cat ears, her cutesy, petite physique, and the seemingly mischievous gestures of a cat, she can already capture any viewer’s heart, moe or whatnot. Toss in a cutesy, cat-like catchphrase and that’s a hundred moe points tenfold! I guarantee you’ll have something pinch your heart after watching this.

Shance: I knew you would. Again, it has been nice and lovely to write in tandem with you again, Yi. Good night!

Shance always brings fun, insightful, and fascinating topics to blogs. And, much like the last time we collaborated, this has been an extremely fun experience. Shance makes it feel easy. Be sure to visit Shance at the lovely Rainbowsphere as well!

88 Responses to Nyan-tastic! Nekomimi and You