Soul and Body: Unbreakable Bonds in xxxholic and TRC 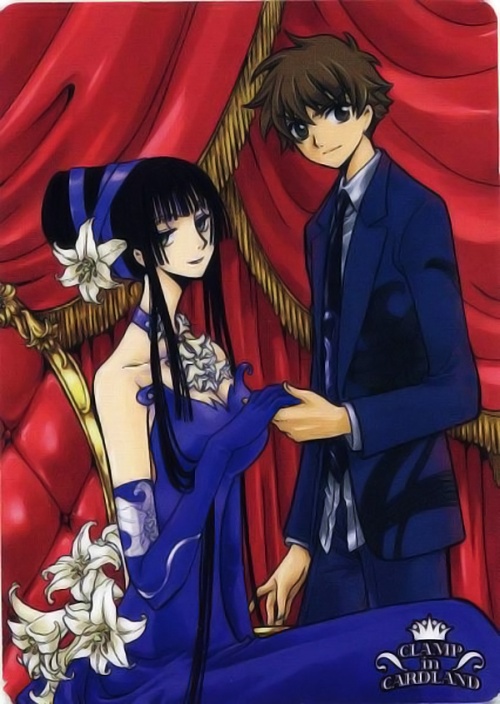 Yuuko from xxxholic and Syaoran from TRC by CLAMP

The discussion about the existence and nature of soul and its relationship with the body has been a long and old one. Anyone interested in philosophical matters has at least a faint idea about Plato’s tripartite theory of soul (according to which the soul is separated in three parts: the appetitive, the rational and the spirited) and his claim that the soul, the essence of our being, is something eternal. Plato gives a more ethical aspect to the soul, since it relates to justice, in contrast to Aristotle’s point of view, which is more earth-bound and ‘scientific’. Soul isn’t some kind of body, but isn’t something spiritual either. For Aristotle the soul doesn’t exist without the body and is defined as a system of abilities possessed and manifested by animate bodies of suitable structure.[1][2] We could go on talking about this topic, but I am no expert on philosophy and this isn’t the purpose of this post either.

xxxholic and Tsubasa: Reservoir Chronicle are two manga by CLAMP that were written almost simultaneously and complement each other, just like soul and body. xxxholic is a more philosophical and psychological set of stories with a supernatural cover, while TRC is an action-packed story. The first engages the soul/spirit; the latter has to do with the body. The above image features Yuuko and Syaoran, the protagonists of each manga, reinforcing or rather establishing this duality and the connection between the works with the use of yin & yang imagery (white and black lilies, female and male). It’s interesting how both works discuss the strong bond between soul and body. 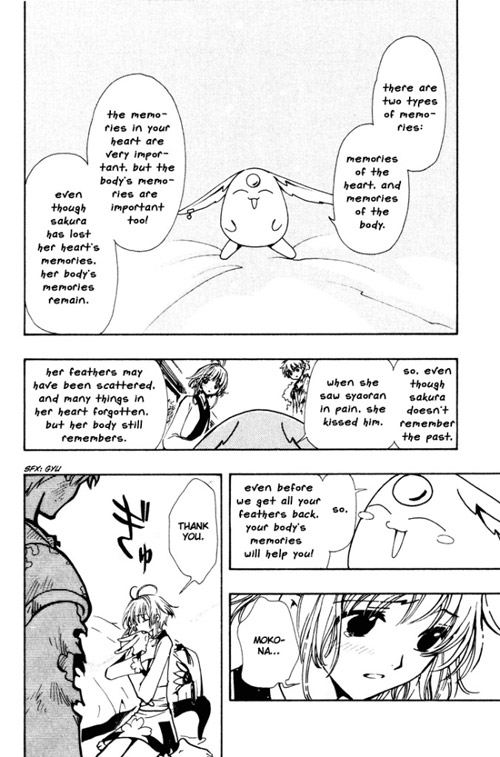 In TRC, while our main characters end in Shura country, Syaoran’s eye hurts and Sakura, without thinking about it much, kisses his eye to lessen the pain and show affection. That comes as a surprise to both, because the princess has lost most of her ‘feathers’, hence memories or soul. Mokona explains that the incident was the result of ‘body memory’. The term is usually associated with traumatic events and thus I’m not sure if we can use it in this case, too (can Syaoran feeling pain be considered a traumatic event?).

Body memory: This popularly-used term is actually a misnomer. The body does not have neurons capable of remembering; only the brain does. The term refers to body sensations that symbolically or literally capture some aspect of the trauma. Sensory impulses are recorded in the parietal lobes of the brain, and these remembrances of bodily sensations can be felt when similar occurrences or cues restimulate the stored memories.[3] For example, a person who was raped may later experience pelvic pain similar to that experienced at the time of the event. This type of bodily sensation may occur in any sensory mode: tactile, taste, smell, kinesthetic, or sight. Body memories may be diagnosed as somatoform disorder.[4]

Of course, here we have to do with a work of fiction and it’s understandable that writers can write things the way they want. And it’s only natural that figurative speech is used; when our chest aches due to sadness or anxiety that has to do with love issues, we simply say that our ‘heart aches’ or that we have a ‘heart break’, even though we know this thing really can’t be happening. In the same manner, Mokona talks about memories of the heart and memories of the body. What Sakura did is more like a learned habit, which due to its association with body movement, isn’t ‘deleted’, but has been deeply engraved into the brain. It’s kind of like heading towards school, taking the same road, even though you graduated one month ago. Or like opening a certain cupboard in your new house, because there used to be the glasses, but now this has changed.

In xxxholic the same idea is repeated with almost identical words in ch.161, p.8 and 9 by the black Mokona this time and the one listening to them is Watanuki. His circumstances were created as consequence of certain wishes and the result is that he doesn’t remember his past, just like Sakura-hime, although for different reasons. But where the difference enters is in which frame and about what topic these words are said in xxxholic; the connection between the soul and the body is manifested in the activities of cooking, eating and tasting. Electrifying, isn’t it?

“To eat is a very important and lucky thing. And it’s very frightening as well.”
– Yuuko Ichihara

The situation looks like this: a lady, who is going to marry soon, comes to the shop with the wish to learn cooking. Yuuko assigns the case to Watanuki who realizes that the lady isn’t bad at all at carrying out the recipes. Naturally, he becomes curious as to why she asked cooking lessons and the answer comes as a shock to him: she finds eating a food she made herself disgusting, like everything else around her. What she cooked was edible and according to the instructions given, but Doumeki, who usually eats a lot when Watanuki cooks for Yuuko-tachi, made a grimace upon tasting the lady’s food and didn’t eat more. Doumeki explains and then realization dawned upon Watanuki:

D: … they tasted like… I couldn’t tell who made them.
W: Well… yeah it was someone whom you’ve never met, after all…
D: No… I couldn’t feel any sense of the person who’d made it, any of their nature or quirks in it. Or any feeling.
W: But, well… that was because all the seasonings and stuff were straight from the recipe…
D: Even so… Even unconsciously, if you happen to like things sweeter, you find yourself adding that bit more sugar or that bit more soy sauce… or if you like things softer, you find yourself boiling it a bit longer. Having lived somewhere cold or lived somewhere hot… even little things like that can make a dish different, even if it was made just the same way. There are things you don’t think about with your head… your body just picks them up, according to all the things you’ve been through in your life, right? Things like taste are the epitome of that.
W: Even if I don’t remember… you think it’s still all there… inside of me? The feelings of the people who made food for me…

Therefore, eating your own food is a way of knowing yourself—and that’s why it can be scary. It is also revealed that Watanuki didn’t have the sense of taste and didn’t know what he actually liked, in spite of his suburb abilities of cooking delicious food. This is explained through his ‘erased’ past and his previous indifference for the people and things around him. Yet the ‘body remembers’ and thus he took the skills and tastes of his father. As for the lady, she ran away from Watanuki at first, but he kept bringing her food he made. And one day she tried it and after that she tried her own food, being left devastated by the truth- that she must be empty inside. She postponed the wedding, until Watanuki would teach her how to add ‘flavor’ to her own food.

I’ll make a small parenthesis here: this story ‘talked’ to me like few have. It’s because I have always somatized my feelings. When I was younger, it was worse. Stress for my achievement records caused me nausea, and even now when there are quarrels between me and my father, I can feel my stomach shrink and I lose weight. Lately, since I learned how to control my nausea, the body found another way to let suppressed feelings out: shivering and diarrhea. Freud theorized that unacceptable emotions led to psychological conflict that was then converted into physical symptoms. And he was right.

You can’t really fool the body. The reason doesn’t have to be clear always. There were periods, especially during the summer, that my health digressed and I couldn’t stop vomiting. Now that I look back at it, it makes sense. I was the good child my parents wanted me to be. I was refused all the simple joys of pupil life, like parties and going out with friends on weekdays, even on Fridays. It was expected of me that I wouldn’t have a romantic relationship. And for years I kept denying that my parents denied me trust, freedom and real love. So, in the summer, when I was totally alone with them, without school to distract me, my organism protested. My body understood that I didn’t want any more of what they ‘fed’ me. Not that protectiveness and possessiveness of theirs.

Cooking, until recently, was out of question, too. The smells made me feel sick. The kitchen is the room that we have every day, every morning, noon and evening our meals and also the place where indoctrination takes place 90%. Two or three years ago, my fear for cooking got more or less resolved because 1. I started admitting being oppressed with the help of a professor, 2. I got into my secret distant relationship with my boyfriend, who made me feel honestly loved, 3. I won a quarrel and thus achieved the feat of having my own room and space and 4. I tried cooking in a shop, where some acquaintances worked, and I had no problem – it was my kitchen I hated. 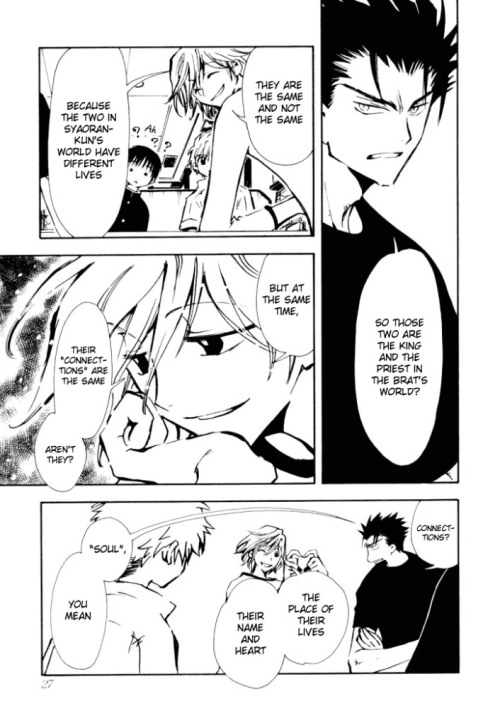 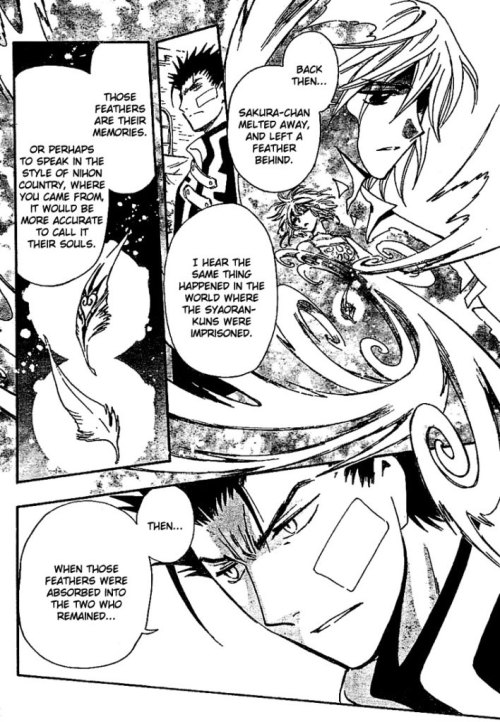 Thus far we’ve talked about how body and soul influence one another in TRC and xxxholic. But what about the nature of soul itself? From the above scans taken from TRC, the first from the first volumes of the manga and the second from the final chapter, we can assume that CLAMP have adopted the Platonic ideas about the immortality of the soul and reincarnation. Soul in the CLAMP cosmos, with the multiple and parallel universes, is like water in communicating vessels. Touya and Yukito in Hanshin Republic, for example, share the same ‘connection’, meaning they are soulmates, as Touya and Yukito in Clow country as well as in the universe of Cardcaptor Sakura where we first encountered them. They share the same bodies, too—for convenience’s shake most probably.

At the same time though the time doesn’t flow in a circle – it doesn’t repeat as Watanuki mentions in xxxholic. Although talk about reincarnation is done in TRC, death is something final and it’s taboo to try to undo it. The results are very messy as someone, who’ve read TRC, knows.

Thanks for reading and see you next time! I hope you found this post interesting. 🙂

With the shiftness of the world’s naughtiest tail, the innocence of youthful eyes and the smartness of a fox’s brain, she travels the world of ideas and articles along with her companion. Through their long journey, they have carried a great variety of spices (anime, manga, music, books…) to make their days and nights as tasteful as possible. You can find their diairies at kitsunetoneko.blogspot.com. She writes under the pen name Foxy Lady there and usually bears the nickname ayame in the wordpress-sphere.

18 Responses to Soul and Body: Unbreakable Bonds in xxxholic and TRC