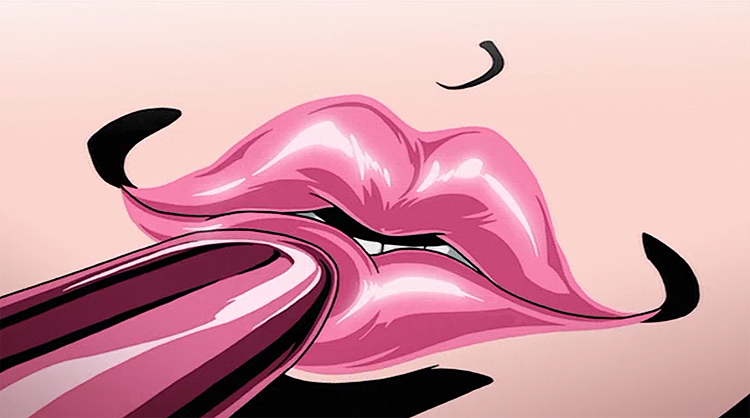 Late last night, I watched Redline, a racing movie set in an intergalactic world. The movie is a visual pleasure with some of the sharpest, smoothest, and boldest animation. The style easily shines through not only the actions and glamours, but the sex appeal. No, there is not really any oral sex in Redline, but considering how sexualized everything is, there may as well have been. 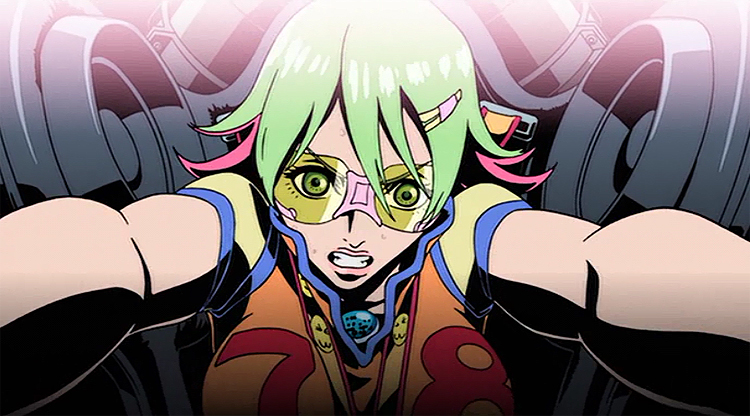 After coming to the end of the brilliant visual sensation, my one outstanding emotion—aside from satisfaction, awe, and warm fuzziness—is arousal. I suppose this is little surprise. After all, fast cars, tight suits, and hot women are the hallmarks of a racing film. In fact, the race itself in Redline is a fine metaphor for sexual intercourse. The thrust of the engines, the sliding, slipping, braking, and accelerating of race cars down a magenta track, the insertion of the egg, and the ejaculation of nitro all culminate to the final penetration past that blood red line. Post-coital heavy breathing, embrace, and a kiss give a very romantic finish to this titillating encounter. So if the final race is sex, then what comes before that might be considered foreplay. And perhaps more specifically, oral foreplay. Indeed, Redline places a very strong emphasis on the eroticism surrounding the mouth: tongue, teeth, gums, and especially lips. 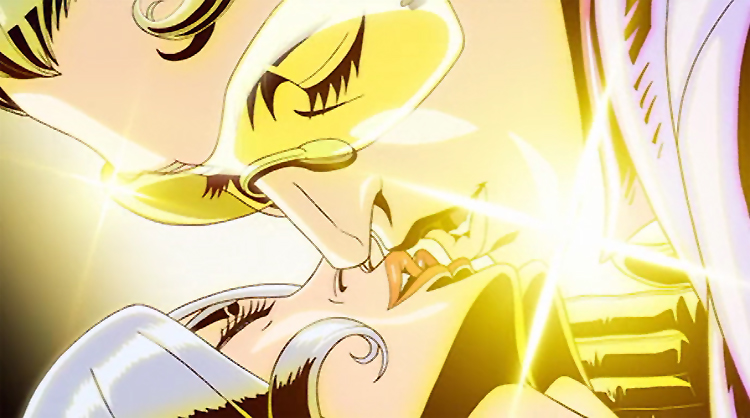 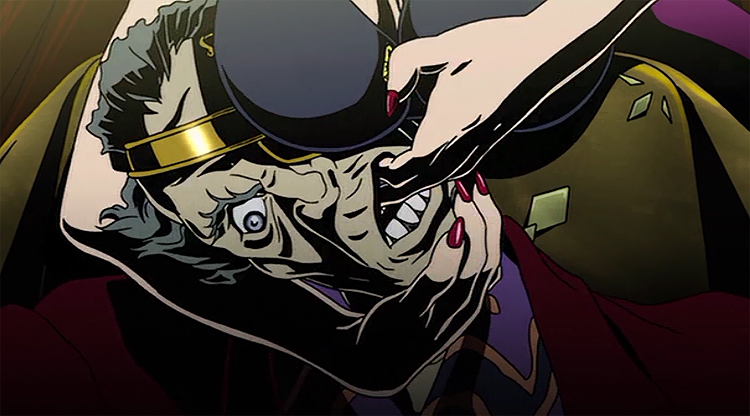 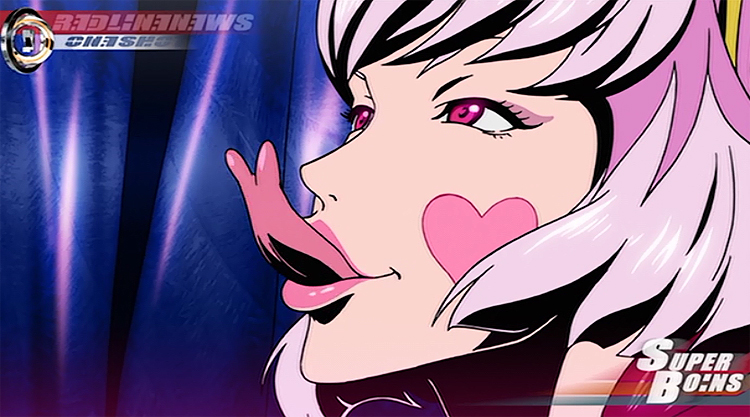 Of course, the most prominent oral imagery come from the Super Boins. These two characters are symbols of female femininity and sexuality in Redline. Thye arrive on scene with a display of tongue tricks and mouth play, all while wearing nothing but loose fur coats.

In a related fashion, a nude Sonoshee accompanies Super Boins’s first spotlight in the film. In front of her TV, wearing nothing but lip gloss and a pair of short shorts, Sonoshee chews on several cherries and lights up a cigarette, acts which are all quite oral and certainly very titillating—especially the way her lips envelope those delicious cherries.

Yes, Sonoshee’s lips are easily my favorite thing about Redline. There is just something so very sexy about lips. 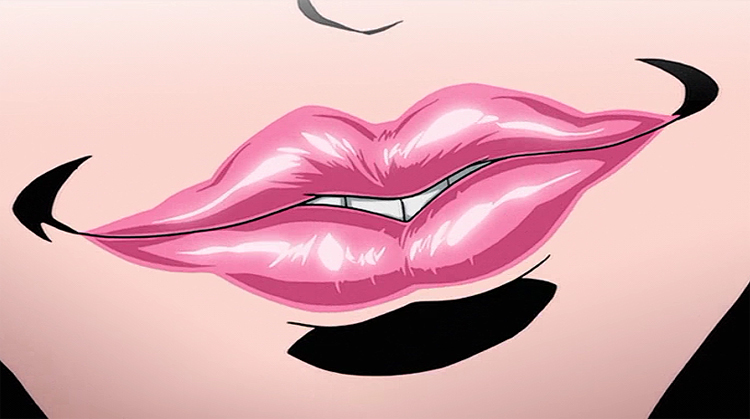 A hormonal explanation have been used to explain this fascination: a direct correlation exists between a woman’s estrogen levels and fullness of her lips. Estrogen is the hormone responsible for female development of secondary sexual characteristics, such as breast and pubic hair. The more relevant basis for the eroticism surrounding lips, however, probably comes from its role in sex. Lips are an erogenous zone with heightened sensitivity due to the number of nerve endings in them. This makes them perfect for kissing and exploring all kinds of naughty things. As an added bonus, lips also swell upon sexual stimulation. 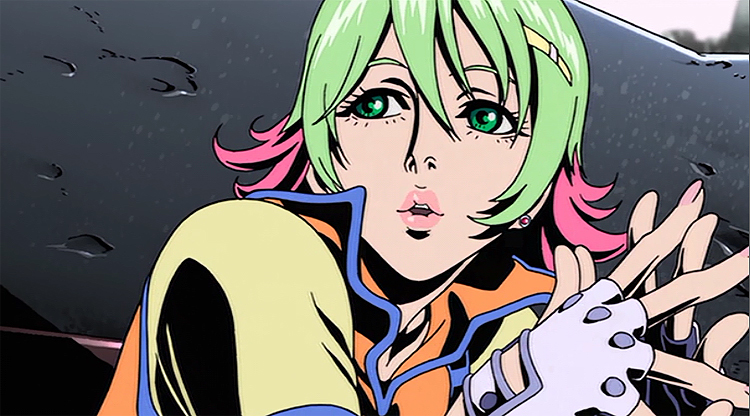 It is little wonder then that there is a huge fashion industry focused on lip styling. Redline also pays very detailed attention to them. Whether it is wearing heavy, thick, bold colors of lipstick like the Super Boins, or simply applying a delicious gloss and light tints like Sonoshee, the characters embrace their lips fully. In a medium that often reduces features to single lines, those voluptuous pairs are especially fascinating. Sonoshee, with her gorgeous lips and lip-shaped Crab Sonoshee, is a sensual reminder of the pervading oral and erotic metaphor in Redline, for lips are signs of sexuality almost as much as genitalia are. 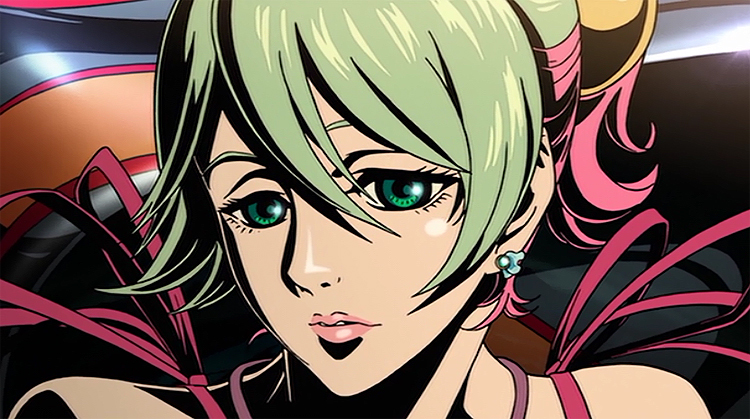 Or maybe, as Freud might possibly say, I was weaned a little too late… Well, regardless of the psychosexual explanation for this fascination, I would so love to “race” with Sonoshee, as well as the Super Boins, particularly the girl with the kinky tongue. Things are going to get freaky.